Now, there was a real mixed bag of responses ranging from the super-pleased to the ‘barge pole’ response. And whilst I had over 1000 comments in total, I’ve tried to pick those which reflect all ends of the spectrum (though most were defo in the ‘thanks but no thanks’ category). So here’s 20 people reacting to gluten free bread launching at Subway…

(oh and if you want to read about my thoughts on the matter or read up on Subway’s cross contamination procedure, check out yesterday’s post by clicking here) 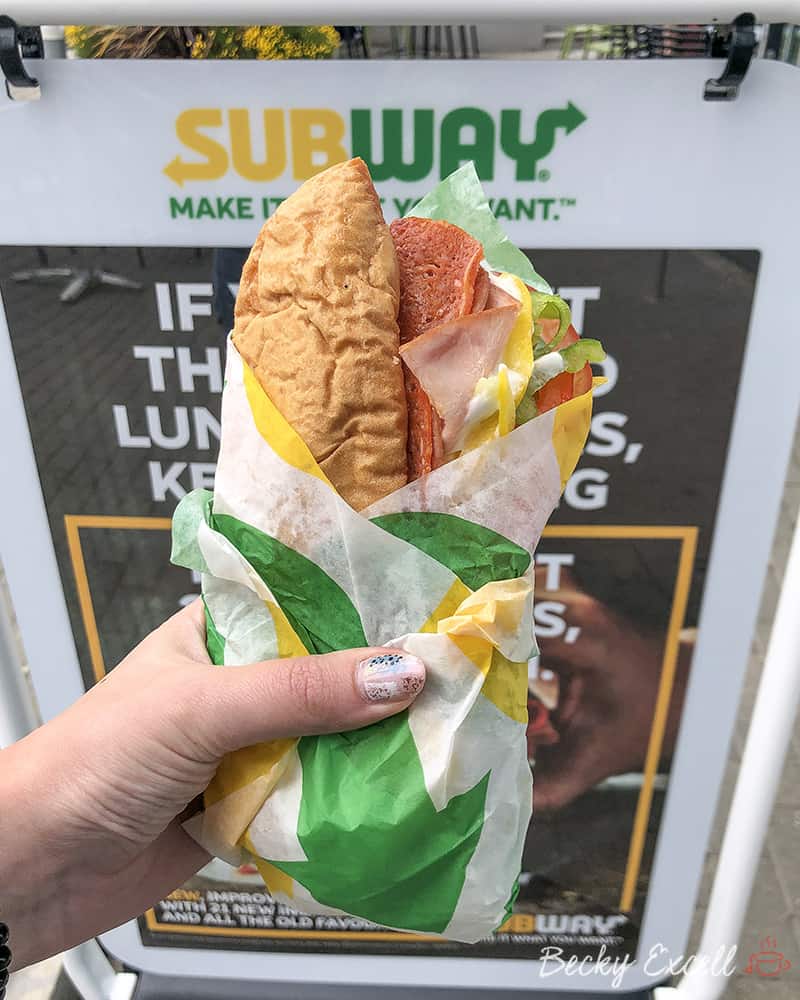 I won’t be going near it with a barge pole until the gluten free bread is placed in a gluten free toaster, clean gloves are used and gluten free salad bits and sandwich bits are separate to the ones which might have gluten dipped into them by gluteny fingers. – @colincamper on Instagram

2. Reaction from an actual Subway employee.

Hi, just a quick note on Subways new GF bread. My son works there part time and has had 1 hour training on the whole thing on Monday evening. He said it’s definitely not safe for coeliacs to eat despite them changing gloves etc

They are still using the same scoop for all meats and this scoop touches normal bread, most of the staff don’t know anything about GF and he said that no one takes it seriously where he works and it cannot be guaranteed that you won’t get ill. – Melanie

3. If you avoid gluten for medical reasons other than Coeliac disease…

No good for a coeliac, but as a non-coeliac gluten intolerant who doesn’t get affected by a very small amount of cross contamination I very much welcome this. Would be good if they could move towards avoiding CC as well, though, such as bags of pre-portioned ingredients for coeliacs. – Neil on Facebook

4. Is this a positive thing? Or even more worrying?!

I’m having one now. A member of staff handled it after touching a normal sub n manager told him to throw it away and stressed the importance of cross contamination. I was the first person to ask as I’d seen this post . Fab service. – Claire on Facebook

Personally (and I do have CD) I really can’t see the point of them even offering gluten free bread if they’re not going to make some effort in the preparation.

That’s like saying we cater for vegetarians but cooking vegetables in the same place as meat, though vegetarians wouldn’t get ill as a result of that, whereas those of us with CD would be very poorly. – Georgina on Facebook

6. Would it just be best to have them pre-made?

I’m not coeliac so I would have it but for those of you who are I wouldn’t risk it. Maybe they should either have them already filled to buy or have a separate section (but I guess that costs money and probably more staff) Must be hard going out for food and worrying your going to get sick – @themisscharlottedore on Instagram

My husband is coeliac and we just accept there is a small risk when eating out. We will definitely be going along and making up our own mind about how safe it is at our local subway (really want to encourage more gluten free products everywhere!!). Thank you so much for sharing though… it’s great to know about these things. ???? – Rebecca on Facebook

The subway salads aren’t even safe because they put their gloves hands in all the salad and meats… new gloves or not it doesn’t matter. A small separate set up is the only way to do it – a fish and chip shop (obviously not the same) has a separate fryer and heat panel thing and the chips are put into a separate bowl so they never go where the other chips have been.

They even have GF vinegar and take it very seriously – if they can do it – I don’t see why subway can’t. Bagelnash was the same before ‘the factory stopped producing gluten free bagels’ – crumbs all. No understanding and really no respect at how sick it can make people. Xx – @lacemac on Instagram

9. How it should/could be done?

I was in a similar style place, not subway, girl said she had gf bread so i started to ask the usual questions… she took out a clean board & knife, changed gloves & said to me that she would not use ingredients on display so she went to fridge & opened new pk ham,,tomatoes etc.

I watched every move then asked if she was coeliac & said no, so i praised her for her knowledge. Enjoyed my lunch with no after effects. – Yvonne on Facebook

10. It could only work if the entire place was gluten free.

I can’t see them opening an entirely separate fillings & toppings section for each time they use the gluten free bread. We’d be better off if a new company started up mimicking subways structure etc but with entirely gluten free food. I don’t see subway ever caring enough to implement the anti cross contamination procedures to make this ever edible – Ed on Facebook

11. There are some people out there who it’s suitable for…

I used to love subway and have been longing for them to get on board with gf. I’m only wheat intollarent so am not effected by cc (I know how difficult it can be when you are coeliac though ?) shame they can’t take a few more steps to ensure its safe for everyone but it’s a step in the right direction at least – @glutenfree_bake on Instagram

12. You need all the info to make your mind up about it.

Knowing all the information is key to making an informed decision! It’s silly for restaurants to not be open and share dietary info openly and easily accessibly so people can judge for their own tolerance levels e.g. do they use the wrapper as a plate as they move along? I think I’d risk it if that were the case ? – @glutenfreegallivanting on Instagram

13. Are they more interested in money than providing people with safe options?

Jumping on the GF bandwagon… wouldn’t even bother going there. Far too risky. Nice thought, but only thinking in the £££ – @paulinmadrid on Instagram

I used to work at Subway and have not even got a salad from there since I was diagnosed coeliac as I know there’s crumbs everywhere, in all the meat & salad tubs ?they’d have to make it in the back and use fresh containers of meat/salad for it to be safe – Louise on Facebook

So, in essence, subway are charging coeliacs 50p extra to potentially get ill. I for one, will not be bothering to go. – Ellen on Facebook 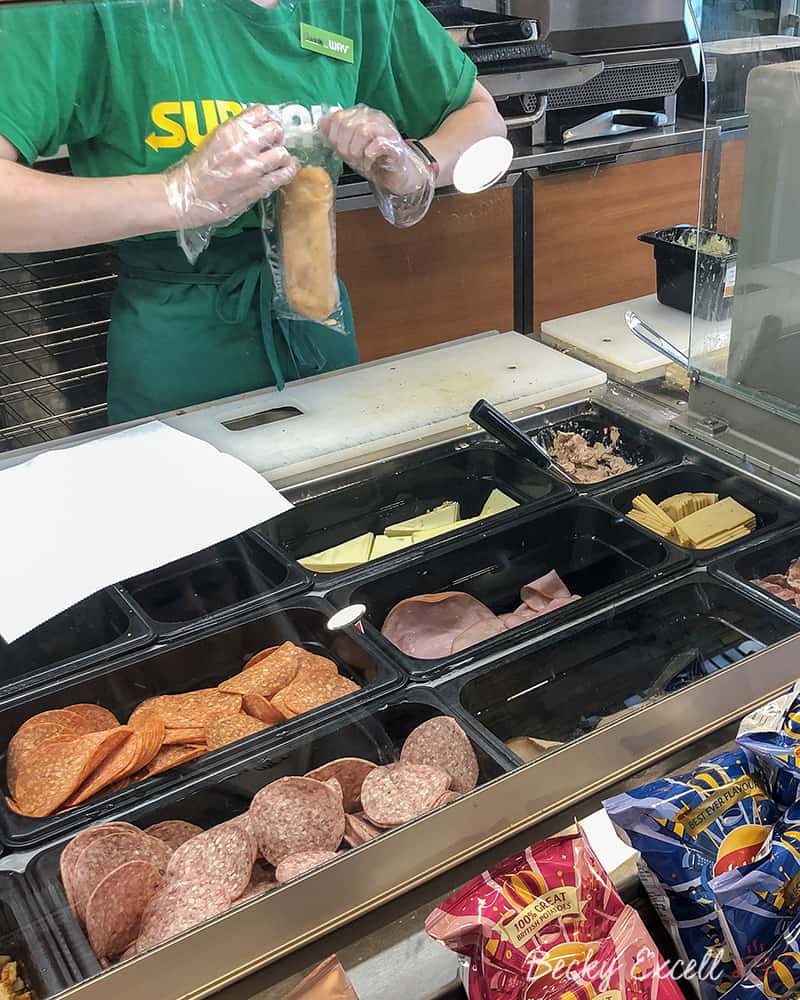 What do you think about gluten free bread launching at Subway?

I have to say that the one thing that creating this blog post has taught me is that the FILLINGS of the sandwich are equally as much of a problem as how the sandwiches are prepared and constructed. If not more, because it’s not a clear red flag until you really think about it.

After going there myself yesterday and seeing one made, I was already very concerned with the amount of crumbs everywhere and how the areas wasn’t cleaned down as promised as my sandwich was being prepared.

But now, I’m convinced that it’s not possible for the end product to still be able to be called ‘gluten free’ when ALL the fillings can potentially come into contact with gluten indirectly. Would you guys agree? 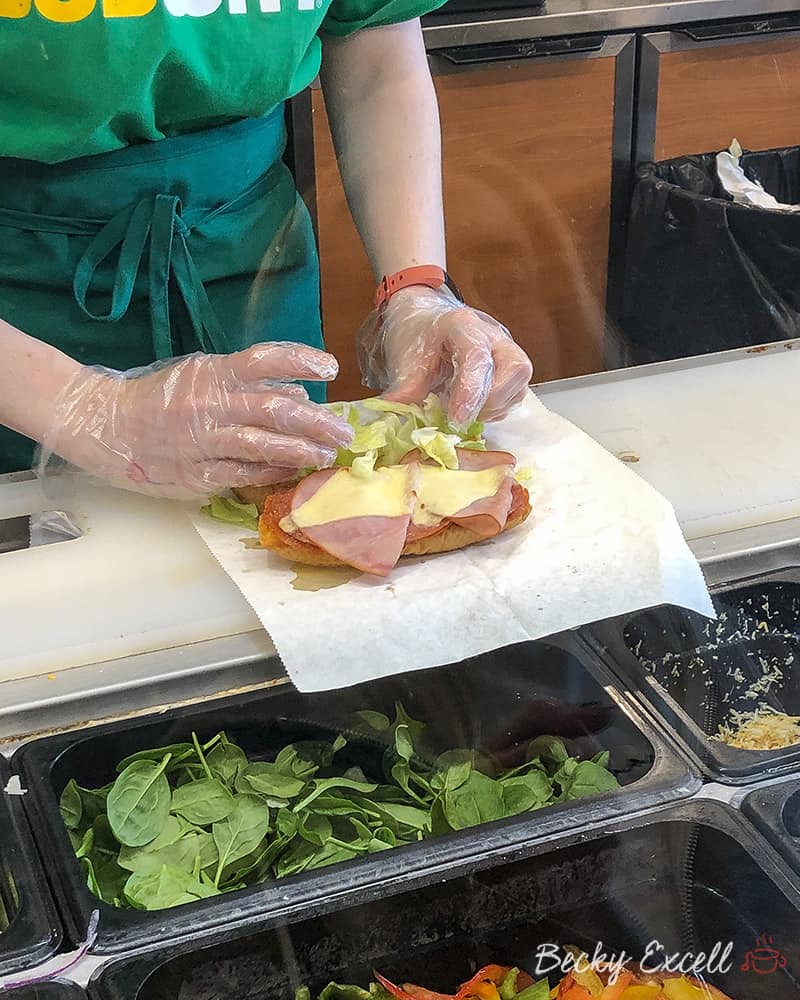 (and PLEASE, if you are considering going anyway, make sure you read up on Subway’s cross contamination procedure FIRST by checking out yesterday’s post here)

Thanks so much to every single one of you who has shared your thoughts. I think it’s so important to not only know what Subway says about the cross contamination situation or what I think about it, but also what all of YOU think about it too.

As always, my best advice is: if you’re not sure, don’t risk it! If you have or haven’t been to Subway to try the gluten free bread, I would love to know your thoughts.

So let me know your thoughts or reactions in the comments below this post. 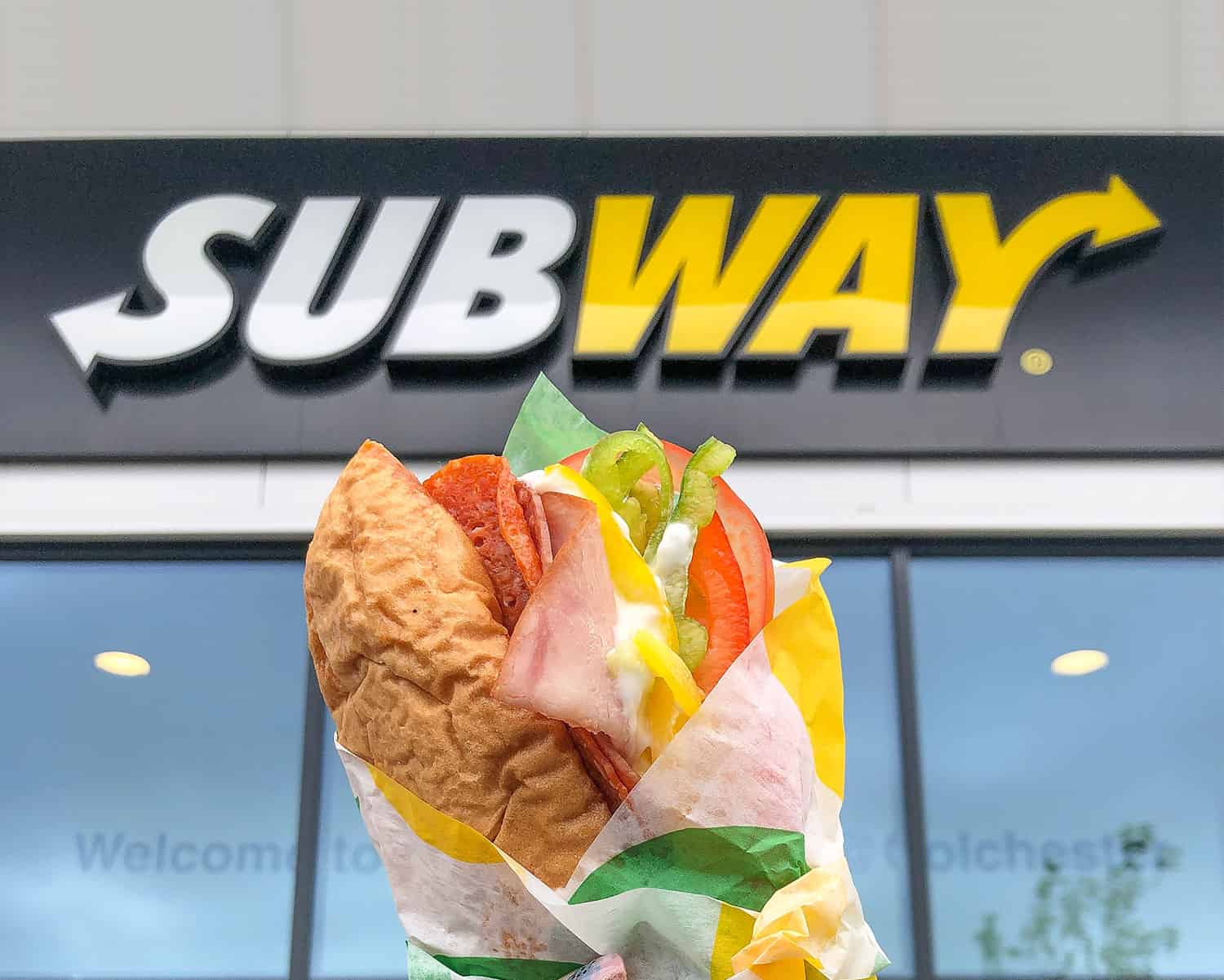 PREVIOUS RECIPE Gluten free bread at Subway: 5 things you MUST know before trying it 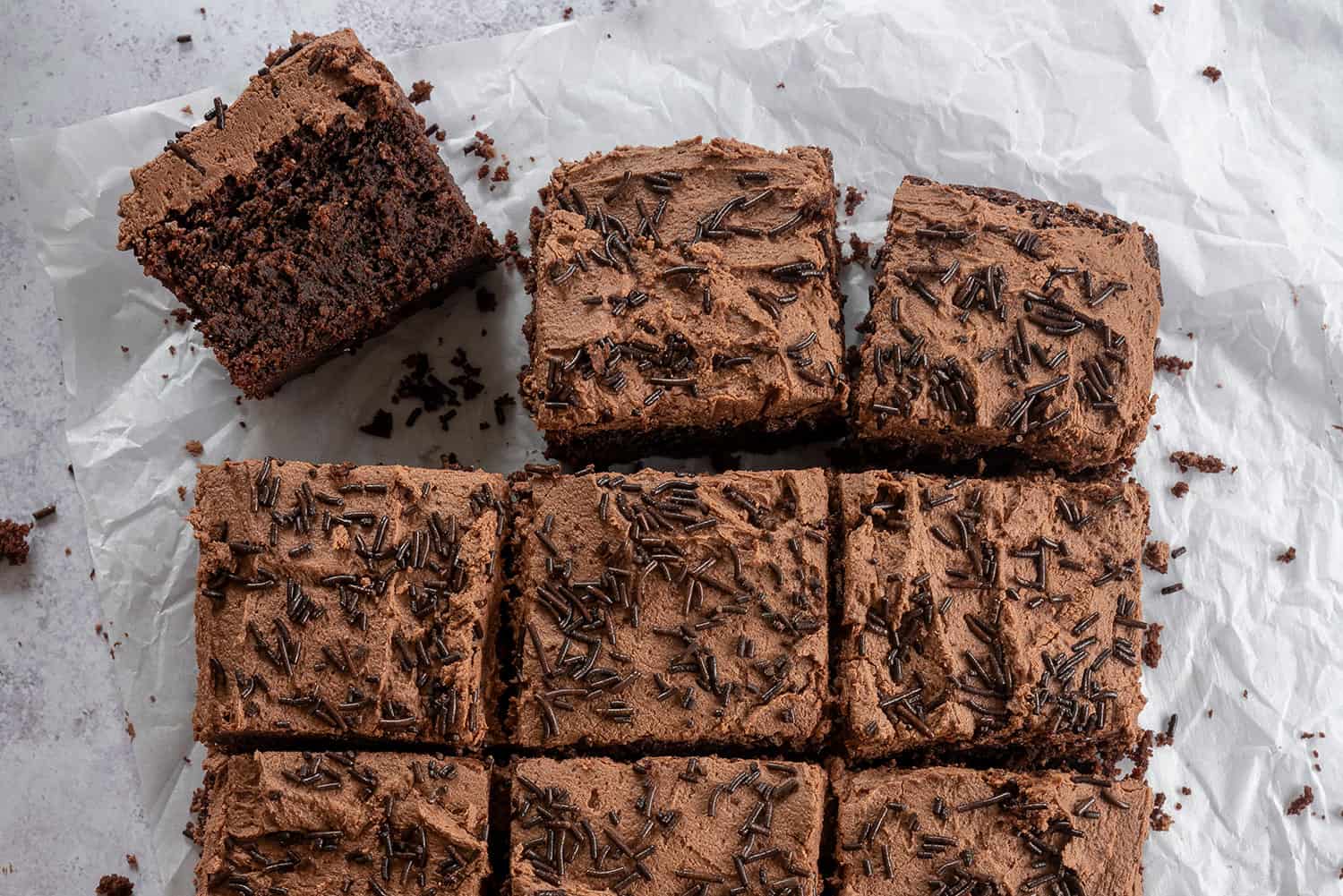