‘How To BAKE Anything Gluten-free’, Gluten-Free Baking Cookbook by Becky Excell 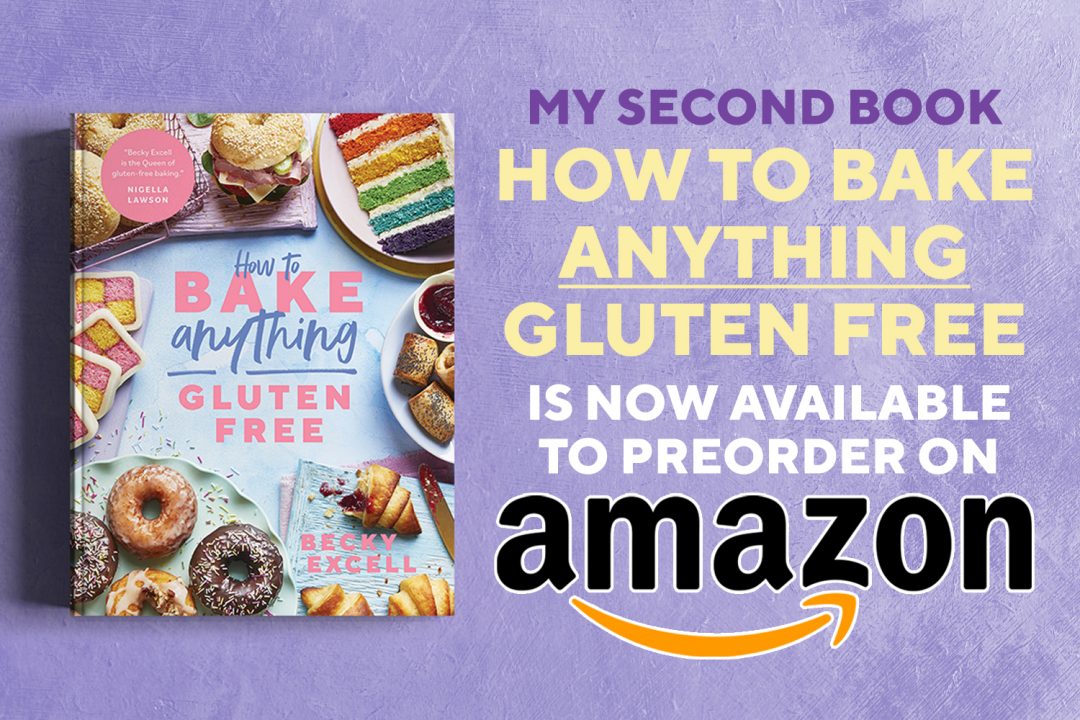 My SECOND hardback, gluten-free baking cookbook book, ‘How To BAKE Anything Gluten-free’ is now available to pre-order! HTBAGF has one mission: to transform your  kitchen at home into your very own, personal gluten-free bakery – where nothing tastes or looks gluten-free.

‘How To BAKE Anything Gluten-free’ may only be one letter different from the title of my first book, but trust me – this gluten-free baking cookbook is an entirely new galaxy of recipes just waiting to be discovered. 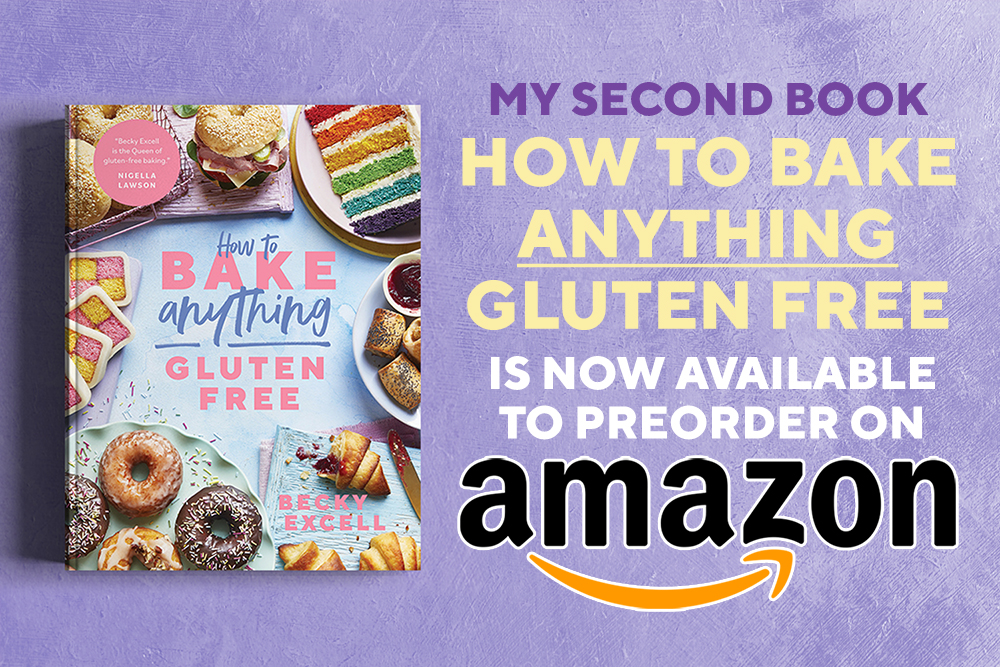 My SECOND gluten-free baking cookbook is now available to pre-order!

What do you mean you didn’t expect me to release a second gluten-free recipe book so soon? Well… me neither!

If I had to sum up my second book in one sentence, it would be this:

This book is for every gluten-free person who has walked into a bakery and realised they couldn’t eat a single thing.

So yes – that’s right, ‘How to BAKE Anything Gluten-free’ was created to show you how to transform your kitchen at home into your very own, personal gluten-free bakery. Not only that, but if I had a gluten-free bakery of my own, this book contains exactly what I’d sell in it!

This book was inspired by my many visits to some of Europe’s best gluten-free bakeries (remember when we were allowed to travel?) where I discovered that gluten-free baking without compromise was possible. So I decided to bottle that feeling and pour it into the pages of my second book.

If you don’t read the bullet points because you can’t be bothered, then here’s all you need to know – it’s a gluten-free baking bible of ALL the stuff we always miss out on.

Sound good? Then read the bullet points anyway, because I spent like 15 minutes pondering over them!

How much will it cost? How do I get it for the cheapest price?

The official RRP is £20, but as I’m sure you know when purchasing any book, the price can vary wildly from retailer to retailer.

For the best pre-order price, I’d recommend pre-ordering it from Amazon. Why? Thanks to Amazon’s pre-order price guarantee, you’ll always pay the lowest possible price when the book is released.

So though the price on Amazon currently says £20, in the (extremely likely) event that it drops by September 2021, you’ll end up paying whatever that lower price is. This was exactly the case for my first book too.

For that reason, you won’t be charged until the book is dispatched. Plus, by pre-ordering, you’re guaranteeing that you get one of the first ever copies of my book – thank you!

Are these brand new recipes? Or is this a gluten-free recipe book of all your old recipes on the blog?

You might be surprised to hear that out of over 100+ recipes, nearly all of them are brand new, with a few fan favourites from the blog (some which are have been improved) thrown in for good measure.

With both of my books, it’s super important to me that you guys get as much value for money out of them as possible. So not only did I squeeze as many recipes in as my publisher would allow (otherwise the book would be huge!) but I also wanted to share as many new recipes as I possibly could.

But of course, in the Christmas chapter especially, you’ll find all your festive favourites from the blog, along with a few classic bakes scattered throughout the book too. Jamaica ginger cake, anyone? 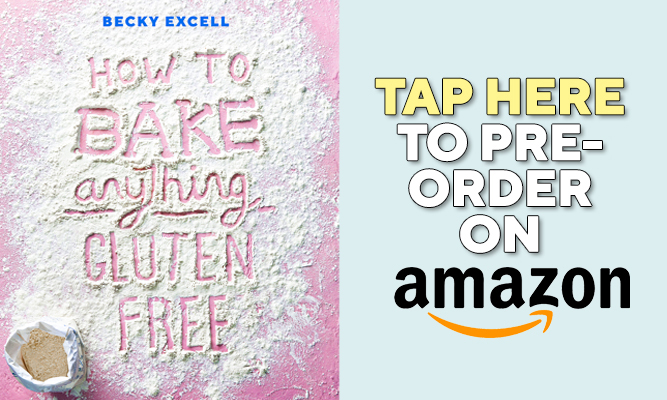 Will there be signed copies?

Currently, I am not aware of any signed copies planned (not saying there won’t be) but it’s a little too early to say yet. I’m hoping so, but if there are, you won’t be able to get them until nearer the date.

Why on Earth should I buy your gluten-free recipe book?

Ok, here’s the hard sell – which I’m not usually very good at… so I’ll just throw some bullet points at you instead – how exciting!

That wasn’t so bad was it? I’m sure you want to buy 10 copies now – don’t forget a copy for your pets too. Tap the photo below to go to the pre-order page. 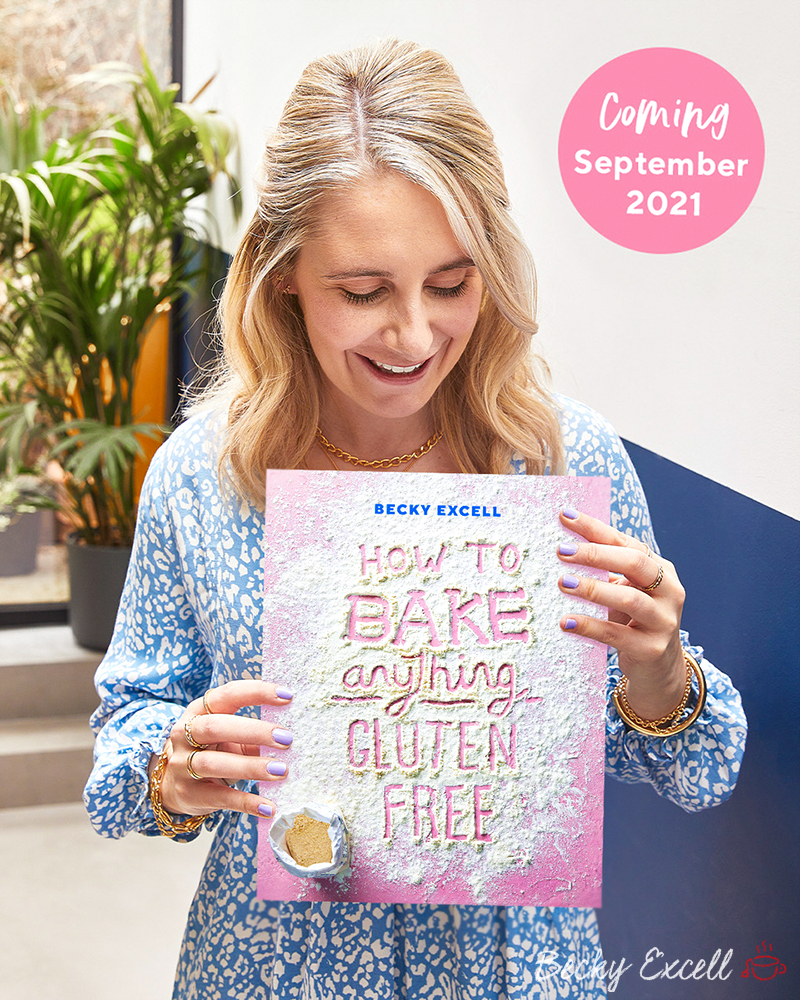 Will the book have dairy-free recipes in it?

Yes – tons actually! Throughout the book, I’ve clearly labelled whenever a recipe is dairy-free. After all, I actually started out as a 100% gluten-free AND dairy-free baker, so I like to think that I know my stuff!

Whenever a recipe isn’t dairy-free to start with, I’ve listed exactly how to make it dairy-free (if possible) for each recipe. This took *a lot* of work and recipe testing, but I’m so pleased that I invested the time to do so.

One review on Amazon of my first book said there wasn’t any dairy-free options… which made me very cross, because it’s actually just plain incorrect! Almost every single recipe in my first book (and now my second book) can be made gluten-free using the tips by the key at the top of the page.

Will the book have vegan/veggie recipes in it?

Yes! I’ve clearly labelled whenever a recipe is suitable for vegetarians or vegans.

If it isn’t veggie/vegan to start with, I’ve also included instructions on how to adapt it, if possible. Which almost all the bakes in HTBAGF are veggie-friendly, there are less vegan options in my second book than when compared to my first.

Why? That’s simply because ‘proper’ gluten-free AND vegan baking is an entirely different kettle of fish – mainly because baking so often involves eggs. Yes, an egg-replacer can work, but when a recipe calls for 4-6 eggs, using that much egg replacer can produce mixed results.

You’re still welcome to give some of the egg-heavy recipes a go, but I didn’t want to flippantly state ‘just use an egg-replacer’ whenever a recipe called for large quantities of eggs, as I haven’t tested those swaps for myself. I hope that makes sense!

Will the book have low FODMAP recipes in it? What about lactose-free?

Yes! Most of the recipes are suitable for the elimination phase of the low FODMAP diet, or if not, will mention how you can easily adapt them to be. Just look for the key at the top of the page, or the ‘Making it’ section at the end of the recipe.

A huge majority of recipes in the book are actually low FODMAP believe it or not!

I’m lactose-intolerant, will I still be able to easily bake recipes from the book?

Despite hard cheddar and butter not clearly being labelled as ‘lactose-free’ on the packaging, they’re actually both tolerated well by people who are lactose intolerant due to their incredibly low-lactose content. I chose to make the distinction between a recipe in my book being ‘lactose-free’ or ‘low lactose’ for clarity – in reality, they both mean the same thing: that they’re suitable for someone with a lactose intolerance.

Remember – I’m NOT talking dairy-free here because all the products I just mentioned are still derived from real cow’s milk. Hence why they work so well in baking!

My boyfriend is lactose-intolerant and we are very well versed on what dairy products are suitable. He used to be 100% dairy-free for around 4-5 years, before we realised he could actually tolerate low-lactose dairy products (like butter, hard cheddar, parmesan and mozzarella etc) with no problems.

So naturally, our knowledge of what lactose-intolerant people should be able to tolerate is exercised a lot throughout HTBAGF, just as it was in my first book. Just look at the key at the top of each recipe for guidance. 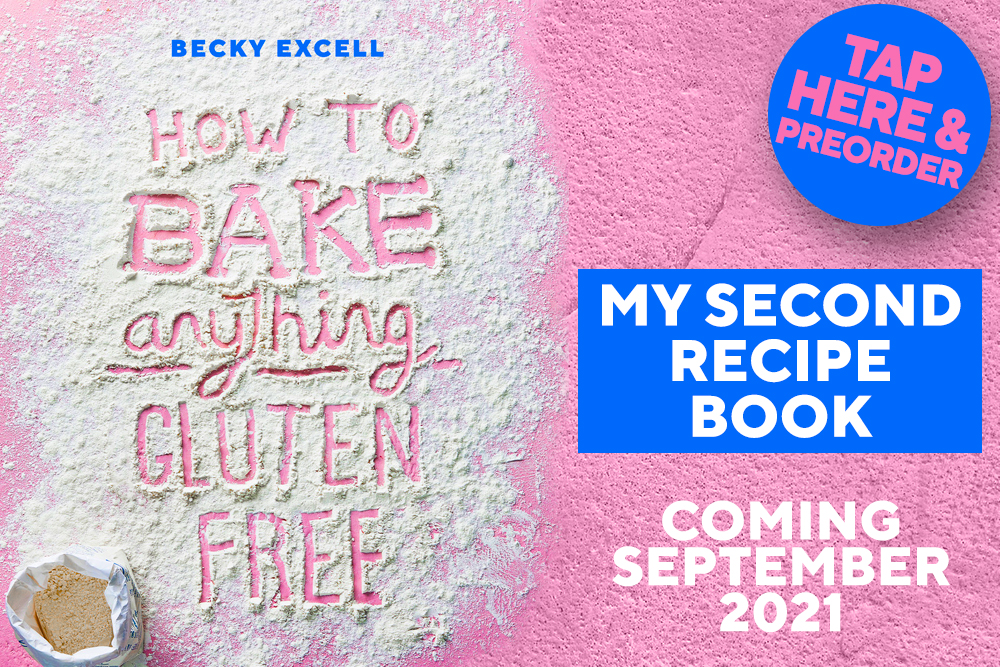 And yet another HUGE thank you to everyone who’s supported me in any way so far.

‘How To Make Anything Gluten-free’ became a Sunday Times Best Seller, Nigella featured it in Cookbook Corner, my recipes were featured in tons of magazine and it sold 50,000 copies in less than 3 months. And you lot get so much of the credit for that – not me, as far as I’m concerned!

All I’ve ever wanted is for people on a gluten-free diet to feel ‘normal’ – because that’s all I’ve ever wanted for myself too. And I hope that HTBAGF is yet another step in doing that for so many more people than I could have ever imagined.

Thank you so much for just taking an interest and reading this far down the post! If you do fancy picking up a copy, just tap this link to head over to the pre-order page.

Want updates on my gluten-free recipe book? Drop your e-mail below 👇🏻 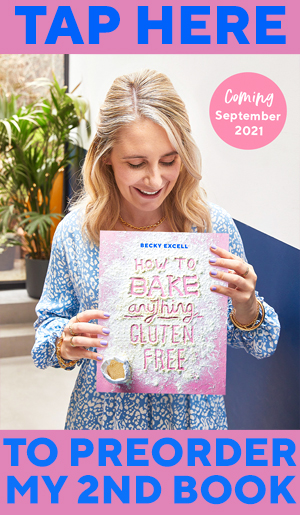