Yep, I’ve stolen Mark’s gluten free chicken in black bean sauce recipe. But it’s ok – because I’m only doing it to share with you lot, so no need to call the Police! It’s also dairy free and has no actual onion/garlic either.

This was one of my absolute FAVE things to order from a takeaway (or buy in a jar!) but a gluten free version just doesn’t exist. Which is weird because it’s soooo easy to make!! I guess you’ll read on and find out as we get into Mark’s gluten free chicken in black bean sauce recipe… 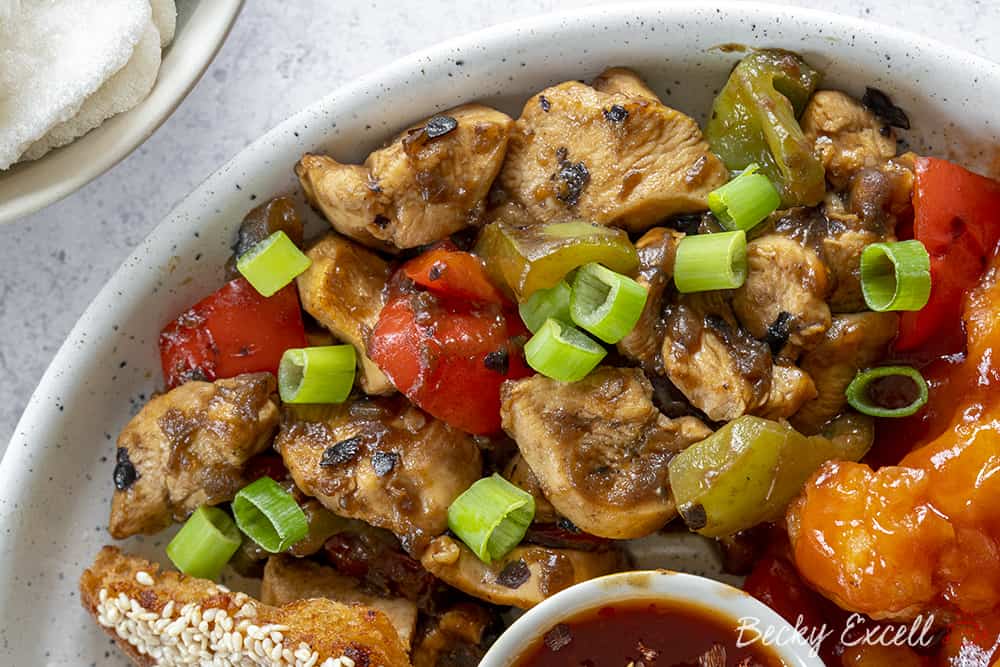 I feel really lucky to not only have someone who creates me meals that I can’t eat anymore… but also someone who doesn’t mind when I steal his recipes to post on the blog!

Mark cooks dinner a lot at home in case you didn’t know, but out of everything, he loves making Chinese takeaway-style meals the most.

(tons of his family are from Malaysia and love this type of food, so I guess that makes sense!)

And as we share everything for dinner, he has great motivation to make his fave meals gluten free… not for me… but so he can eat them again too 😂 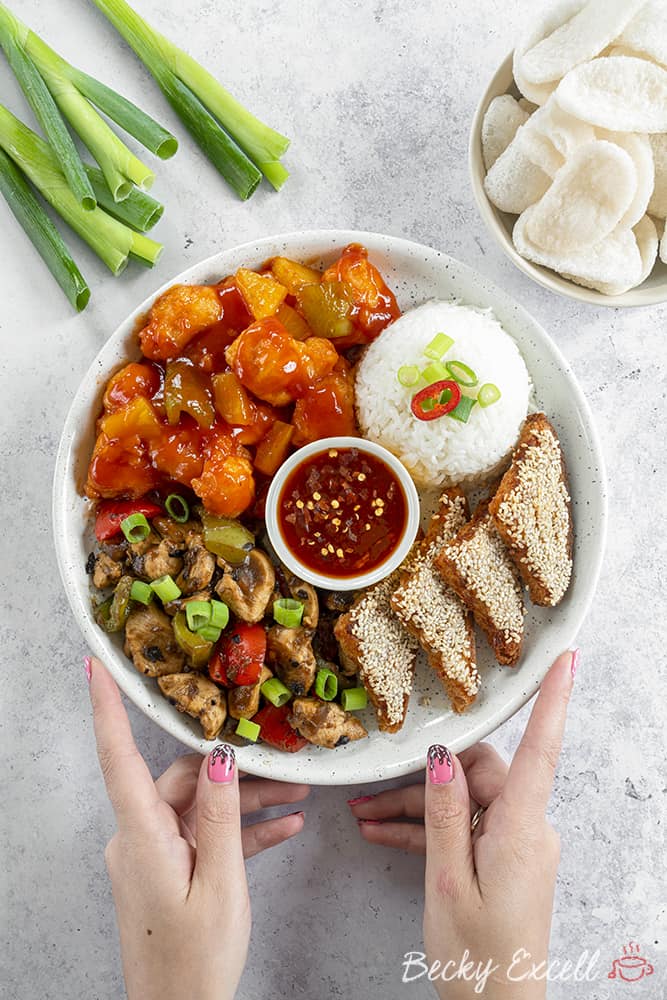 Well… it tastes exactly like chicken in black bean sauce that you’d order from a takeaway! Tender chicken in that slightly sweet and salty sauce with a lovely flavour from the peppers.

With a few fresh spring onion greens on top, you’re good to go and it all only takes about 20 minutes to make completely from scratch.

But there’s a few special secret ingredients in Mark’s gluten free chicken in black bean sauce recipe (he always seem to throw them in!) that you should probably know about first… 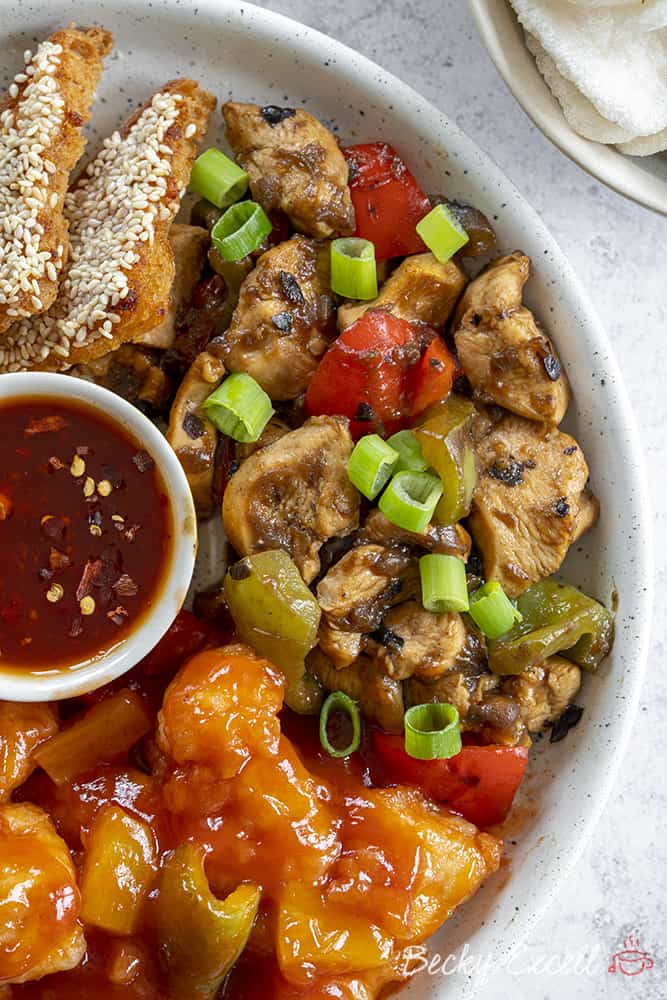 And fortunately, you won’t have to go hunting in your local Chinese supermarket (if you even have one) for them.

Mark actually uses these ones that I bought for him in Sainsbury’s. These are especially great because they’ve already been soaked in water.

Otherwise you’d have to soak dry black beans in water overnight for at least 24 hours. That makes creating his gluten free chicken in black bean sauce recipe a whole lot less quick and easy! Here’s a full list of all the ingredients you’ll need:

For the black bean sauce 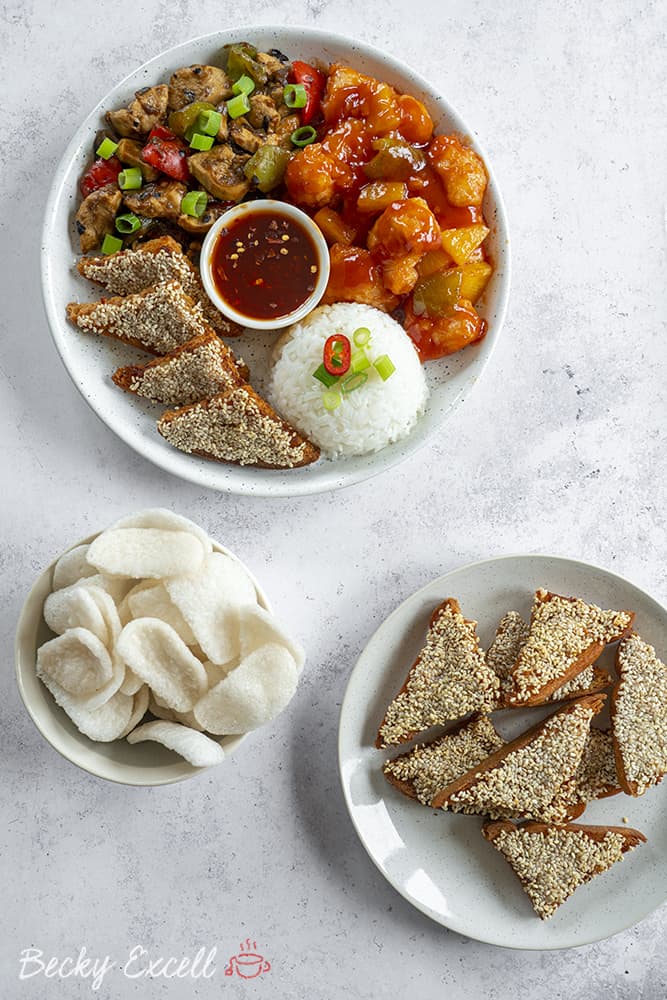 His second secret ingredient is black treacle and he was really proud of coming up with this addition.

Basically, you’d normally use dark soy sauce AND light soy sauce to make a black bean sauce… but obviously, there’s no such thing as gf dark soy sauce. So as a result, the sauce looks a little thin and not dark like how you’d imagine it looking.

So just to make things a little bit darker, Mark used black treacle instead of brown sugar which worked a treat.  It also helps with that subtle sweet flavour and sticky texture which works so well in black bean sauce.

Here’s a few tips and FAQs about making the recipe…

Not especially, but a half-decent wok goes a long way if you intend to make a few of Mark’s Chinese takeaway recipes in the future.

Mark uses one like this which is pretty cost-effective and has lasted us years. Otherwise you’re good to go!

Yep! There’s no worries about dairy with the recipe – it’s naturally dairy free.

Of course – it’s easy peasy! Instead of using chicken, you could easily sub in a chunky veg like aubergine or sweet potato.

Just chop into bite-sized pieces, drizzle in a little oil and roast in the oven until cooked. Then add them in at the end of the recipe instead of chicken.

Bear in mind though that roasting the veg will probably take somewhere in the region of 30 minutes, so it might mean that it takes you a little long to prepare this recipe!

Yep, you certainly can and Mark has used black beans like this in the past. You just need to add water to them and allow them to soak for 24 hours and prior to using them.

As that can be a pain, we’d recommend using these which you can find in Morrison’s or these which I found in Sainsbury’s.

Just don’t even think about making this without black beans or any other type of bean!

Definitely. Just finely slice your beef and fry until cooked through and set aside until you need it until later. Then just continue the recipe as normal.

I think making this beef makes this even better!

Of course you add more veg in if you like but the green pepper especially is soooo vital to the flavour of the black bean sauce.

Because of that, I wouldn’t recommend removing the pepper, but feel free to add in other veg like baby sweetcorn, mange tout, or whatever takes your fancy.

Anything tastes nice covered in that sauce!

I’ve decided not to list this recipe as ‘low FODMAP’ because black beans are high in fructans. Therefore, I wouldn’t recommend that anyone on the elimination phase of the low FODMAP diet try this recipe until after successfully reintroducing black beans.

I’m in the maintenance phase of the low FODMAP diet and I generally don’t tolerate beans so well. But since the amount in this recipe is fairly small when you divide it between two people, I find that I can tolerate them ok.

But remember, everyone’s different in what they can and can’t tolerate and in what quantities!

Of course! If you’re lucky enough to be able to eat onion and garlic, by all means, include it if you fancy. Both of us have IBS and can’t tolerate either in any quantities sadly!

But if you can, you can add a quarter of an onion to the recipe. Just fry it in oil before the pepper until slightly softened and then continue the recipe from step 3.

If you want to include garlic, mix 1/2 tsp of minced garlic puree into the mashed black beans before adding them to your wok.

Yep, you can but just bear in mind that the sauce won’t be as dark as you might expect. You can always just use 1 tsp of brown sugar instead.

If you don’t want to use any sugar at all, I’m sure you can get away with it, but a little sweetness works really well with this recipe – trust me!

Cornflour is gluten free fortunately and it’s included to make the ‘gravy-like’ mixture into more of a sauce.

So I wouldn’t recommend making this recipe without it as it will never reduce to a nice sauce-like consistency when you reduce it down!

Looking for a gluten free chicken in black bean sauce recipe? Here's our easy peasy recipe that's so easy to make at home and tastes just like a takeaway!

For the black bean sauce

Thanks for reading how to make my gluten free chicken in black bean sauce recipe! If you make it, I’d love to see how it turned out so don’t forget to take a snap of your bakes and tag me on Instagram! 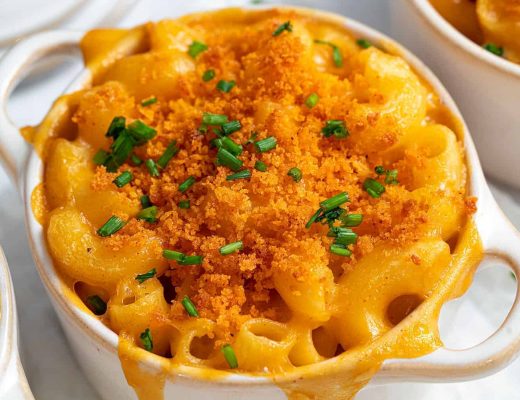 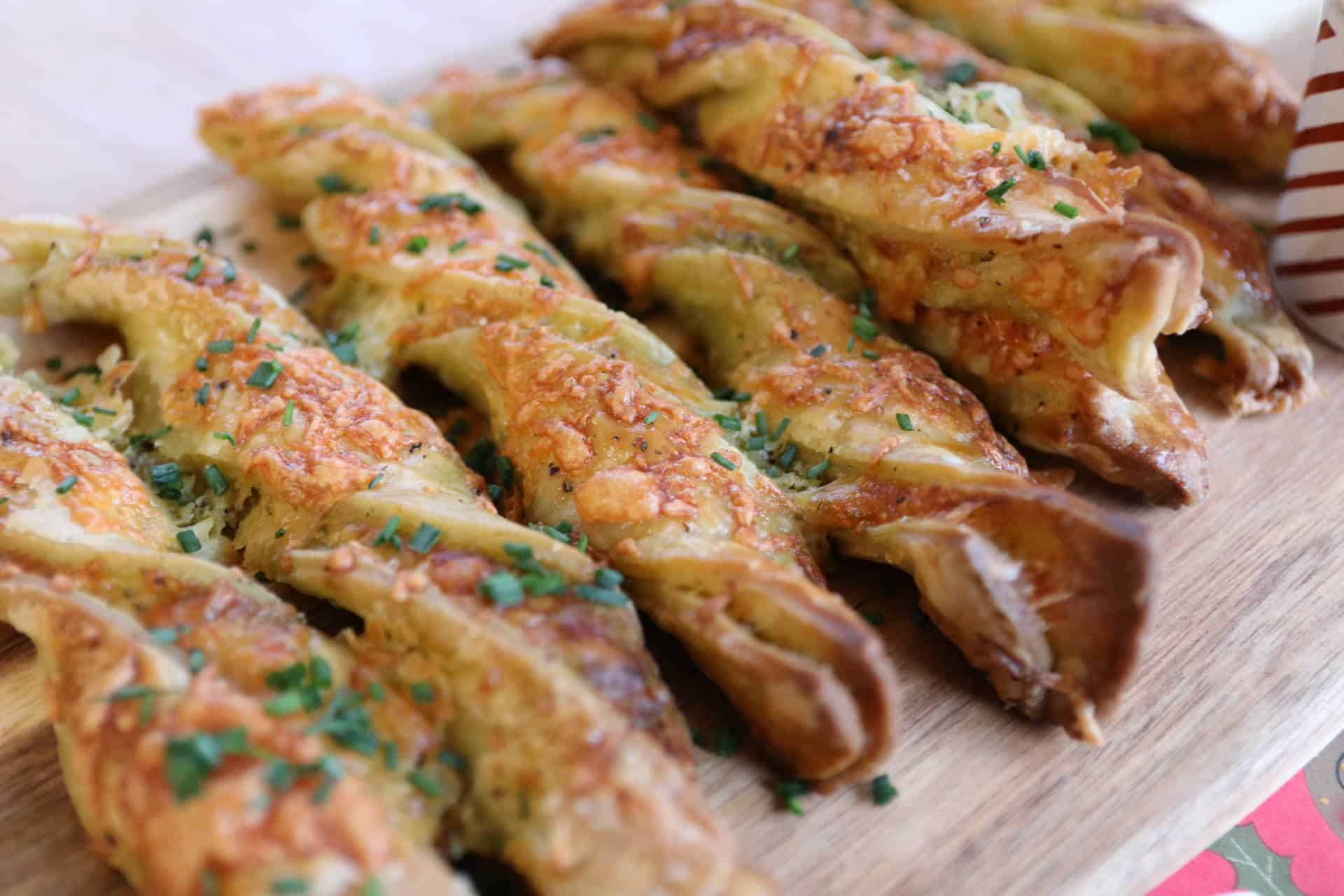 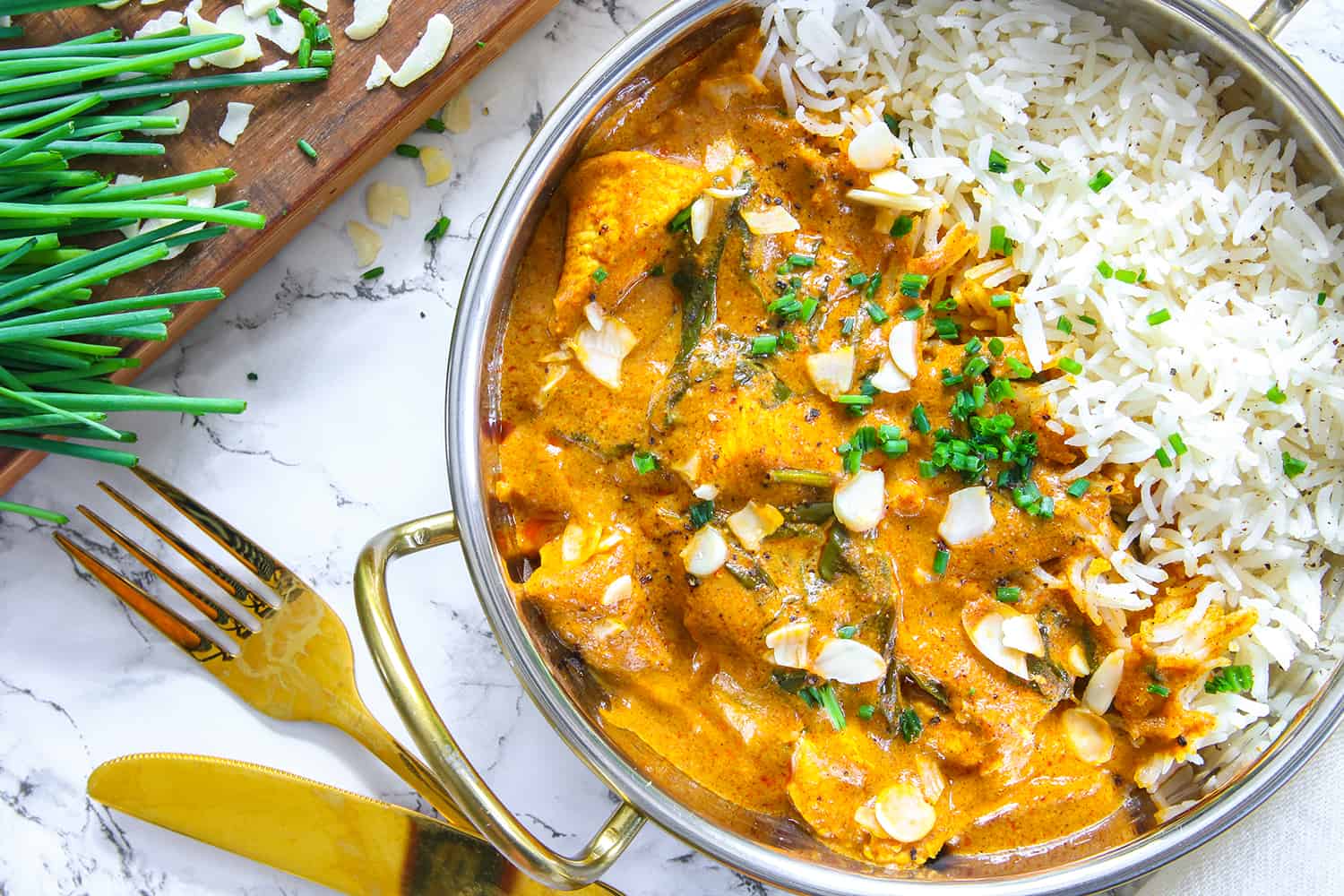 Gluten free cinnamon buns 😍✅ Who wants the re

Is it even Sunday without *super crispy* roast pot